The Prime of Miss Jean Brodie is one of those movies I now realise I should have seen a long time ago. Like the girls of the film, I too attend an all-girls senior school in Edinburgh, Scotland. In fact, I believe the real ‘Jean Brodie’ taught at my school for quite some time. Moreover, it is a breathtaking character study of one truly fascinating woman; I refer, of course, to Miss Jean Brodie.

Jean, a passionate and charismatic schoolteacher, insists that she is devoting the prime of her life to her pupils. She is sometimes shrill, borderline bizarre at other moments, but nevertheless there is no doubt in our minds that she is beneficial for her impressionable students. As the story goes on however, we grow to become less sure that her powerful influence is a good one. The film, which starts off as an innocent, often humourous little tale, gradually becomes complex and tragic, encompassing issues that are just as relevant as they once were in the 1930s.

At the heart of the movie, is the character of Jean Brodie herself. Ignoring the conservative curriculum, Jean sets out to truly educate, to lead out, from the original Latin, what is already within. In between spinning romantic tales of her lost love and speaking about her great admiration for Giotto, it is easy to see why Jean Brodie is so adored by her students. She also manages to capture the hearts of two of the male staff, the charming art teacher Teddy Lloyd, and the choirmaster Mr Lowther. It is only the married Mr Lloyd who she loves though, much to her dismay.

In particular, Miss Brodie dedicates extra time and attention to four little girls, nurturing them to be the crème de la crème. The ‘Brodie Bunch’ (a nickname I have suddenly taken to calling them) consist of four very different girls: Sandy, Monica, Jenny and Mary McGregor. When praising each of their unique virtues we see how affectionate and understanding she is towards her girls. Only later though do we realise the detrimental effect this has; we realise that she is confining the girls to exactly what she has decided for them, and molding each into the individual women she had once aspired to be. Perhaps the most cruel and frightening action is the creation of her younger self in Jenny to satisfy one of her ex-lovers.

The Jean at the beginning and the woman at the end of the film are almost different people. Whether it is because she has inherently changed or if it is our own conception of the character has changed is really up to the individual viewer. The word conflicted is not nearly enough to describe how one feels as the film draws to its close. We realise the many flaws of Jean Brodie, and yet her betrayal at the hands of one of her most trusted girls is truly tragic.

It would certainly not be wrong to bill The Prime of Miss Jean Brodie as a ‘one-woman show’, as I believe it often is. As Jean, Maggie Smith is vivid, courageous and complex. The way she tends to romanticize the real world, her great devotion to the teaching profession; it is all these attributes that make her an innocent, and ultimately sympathetic character. The four girls though, the ‘set’, are also very interesting in their own right.

Pamela Franklin, who plays the quietly intelligent Sandy, gives an especially fantastic performance. Like the other girls, she grows up revering Miss Brodie. As Sandy becomes more aware of the real  world and Jean’s true attentions however, she breaks away, defying her predetermined fate and shattering her stereotype. In one sense, Sandy’s spectacular rejection of Miss Brodie highlights her teacher’s more positive influences; she has become an independent and bold young woman, unafraid to stand up for her own beliefs.

The setting of Edinburgh contributes hugely to the mood of the film. There is one particular shot of Edinburgh Castle that stands out in particular to me. Sitting on a black crag, the castle towers over modernity, stubbornly out of place with the rest of the composition. Looking up at the looming facade, we realise that the castle is actually a great symbol for Jean Brodie herself: it is indifferent to its surroundings, and stands with a relentless defiance. 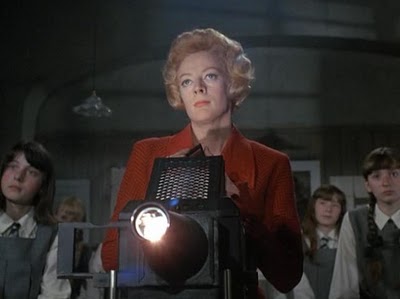 Perhaps my favourite scene from the film though is the one in which Jean is showing the girls some slides of her last trip to Italy. The close-ups of Jean’s face as she watches her beloved Italy are very touching. As she shows the young girls the bridge on which Dante met his beloved Beatrice, Jean is reminded of her desperate hopes for young Jenny and Mr Lloyd. It is this that evokes her deep-rooted love for Lloyd, revealing her concealed emotion. The final moments in which Jean’s hard exterior breaks down are harrowingly beautiful.

The Prime of Miss Jean Brodie, is, essentially, a character study.  Interestingly, we do not get to know the real Jean Brodie; we do not truly understand her motives and reasoning. Instead, the audience learns about Jean through her actions and their consequences. It is this behaviour, this benevolent destructiveness of Jean Brodie that makes the film so engrossing. The ending of the film, the girls leaving school for the final time, is moving. As Sandy walks out crying over all that has happened, Miss Brodie’s voice is heard saying her motto: ‘Give me a girl at an impressionable age, and she is mine for life’.