One of the best aspects of the study of cinema is watching the story of a magnificent art form unfold, and observing a kind of great conversation blossom between filmmakers across the world. In many ways, Yojimbo is the continuation of the classic Hollywood tradition; one need not look too deeply to find elements of thrilling noir or the sweeping western. Combined with a story so quintessentially Japanese  —a wandering ronin who finds his world vanishing before him —we see in Kurosawa’s Yojimbo a memorable blend of cinematic cultures, resulting in one of the most influential films of all time.

‘Yojimbo’ is roughly equivalent to our word for ‘bodyguard’. It is this position that our hero accepts upon arriving in a small town. He is a ronin —a masterless samurai— drifting through the depths of 19th century Japan. Very often we see him with his backed turn to us, emphasising his distance and his detachment from the world around him. Even his name he never reveals to us; rather, the samurai goes simply by ‘Sanjuro’ (which literally means Mulberry-Field, the first thing he sees upon being questioned).

It is through the eyes of this classic ‘man with no name’ that we see a darkly humorous tale unfold. From his point of view, we watch a little town divided; we watch ordinary peoples separating into the two rival factions of Seibei and Ushitora, the reigning crime lords, with tensions running higher with each passing day. Both sides want to rid themselves of the other, yet neither really knows the first thing about fighting. And so the two resort instead to growling and grumbling and rather feebly attempting to scare the other out of oblivion. Needless to say, it doesn’t work.

The small-town war drags on and on until the arrival of the aforementioned samurai, the peerless swordsman that both sides need in order to annihilate the opponent. Sanjuro though, with his slightly warped (albeit ultimately endearing) sense of justice, chooses to keep a watchful distance. He promises his loyalty to both but in reality is loyal to neither, preferring instead to mess with everyones’ despicable (and might I say, slightly stupid) heads.

So there you have it. A nomadic stranger who rolls into town —the mysterious man who sweeps the people off their feet and, in his own way, eventually saves them all. In other words, Yojimbo certainly has something of the archetypal western. As for the never-ending hostility between two morally questionable gangs —dare I say a Pre-Code mafia dynamic may come to mind? Of course, these similarities scratch only the surface of the Western influence apparent in Yojimbo. As mentioned earlier however, it is really not these instances of isolated inspiration that are most intriguing; instead, what is unquestionably more fascinating is the coming together of all the various styles and ideas. It is this integration of both old and new that has led to the creation of something entirely innovative, and which has, in turn, come to influence the many films that came subsequently. 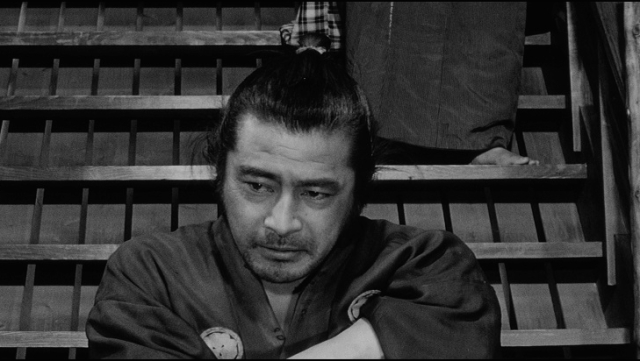 One of the most brilliant scenes of Yojimbo, which sees Sanjuro visit the crime lord Ushitora with some rather devastating news, demonstrates exactly this. Sanjuro sits on a wooden tread, recounting the incident as Ushitora climbs slowly down the stairs. On one level, Kurosawa simply employs intensely programmatic music, which mirrors the emotive style of golden Hollywood. The sparse words and stylised movement however, punctuated by bursts of music, is, I believe, rather characteristic of traditional Japanese theatre, namely the classical form of Kabuki. Combined with the fact that Ushitora himself is out of the frame, and that we see only his feet on the rigidly straight lines of the steps and the support of the stringer —which remind one almost of the bars of a prison— Kurosawa creates a utterly stifling tension. Ushitora is trapped, and just from this apparently simple composition, we all know it.

There are truly so many wonderful moments in Yojimbo, and to analyse them all would certainly be a pleasure.  It would though, I’m sure, take you poor readers an age to wade through. So instead I thought I’d leave you with a brief moment that struck me particularly, and which I feel demonstrates especially well the skill of Kurosawa.

We watch on our screens the plight of a woman bound in ropes — a woman whom before this moment we have never seen. She briefly escapes her capturer, and runs to her little boy. The scene is profoundly moving; the strings soar, and for a passing instant, mother and child are reunited. A tonal shift quickly ensues: we cut to the totally useless villain who cannot control (and I do apologise to the feminists) a little woman. There is a tonal shift in very literal terms too —the expressive strings are replaced by a Baby Elephant-esque ditty.  The result of all this is a rather charming amalgamation that is characteristic of the entire film: a brilliant mix of hilarity, genuine thrills and a heartfelt sincerity. What more could one really ask for?